Furniture often acts as a vessel for both the tangible and the abstract. When done right, a piece of furniture becomes an ambassador for another time, philosophy and sensibility. So, even the smallest details become integral in telling a story. Given a time machine, not everyone would opt for 18th century France after all.

This week we would like to present to you a stunning desk, somewhere between Emperor Asoka and the young man for whom this desk has been commissioned.

This desk takes us to the story of Buddhism, which enjoyed a thriving patronage in first millennium India, thanks to which we have inherited a well preserved artistic culture today. One of the major patrons of Buddhism was Emperor Asoka of the legendary Mauryan dynasty. The emperor chose a pacifist life after witnessing the destruction at Kalinga. Following his conversion to Buddhism, Asoka propounded a set of edicts, called dhamma in Prakrit and dharma in Sanskrit.

Vedic society, which had hitherto a stronghold over North India, consisted of elaborate rituals and a strict caste system, both of which served to the privilege of the priestly caste. Dharma sought to instil a secular sense of social responsibility among the warring commercial classes and Brahmin orthodoxy.  It was not just a social message but a politically shrewd inception as well. 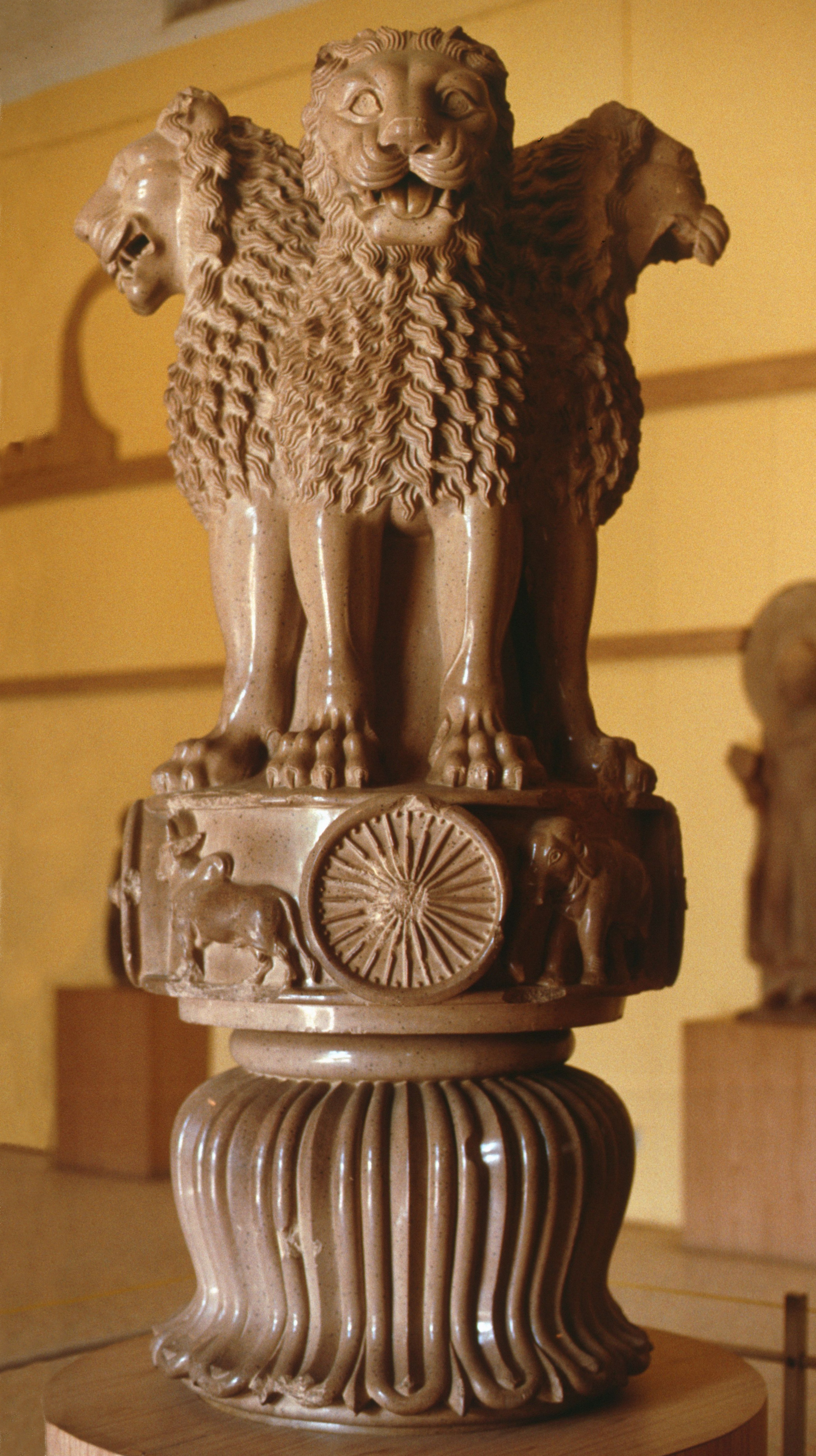 The Asokan pillar at Sarnath, from which we drew our inspirations. This particular
capital was  appointed as the state emblem of India in 1950. It is guiding to dwell on its origins and the symbolism of the animals.
Central to Vedic rituals were animal sacrifices. It is believed that Vedic society was the earliest instance of mass domestication and slaughter of animals in the history of the subcontinent. Consequently, a central pillar of Buddhist and Jain believes was the peaceful cohabitation of all  creatures, and they were staunchly opposed to animal sacrifice. Fittingly, this desk was crafted for a vegan patron. We replaced our standard damask upholstery in favour of a 100% cotton lining, which can be seen in the drawers. Asokan society was an artistically rich culture. The message of dharma was desemminated throughout his empire, through rock inscriptions and pillars. Asokan sculptures demonstrate that the acanthus motif is owed as much to Indian history as to Western Classicism. An Asokan lion pillar consists of four asiatic lions facing the cardinal directions, with the lions representing the chakravartin Buddha, roaring to symbolise the might of Buddhism. They are the earliest examples of Indian stone sculptures, as earlier models are believed to have been carved in wood. The frieze consists of a very deep relief carving of an elephant, horse, bull and lion, each followed by a chariot wheel. The lions were topped by the Asokan dharma chakra, the spinning wheel of dharma which carries society forward. However this is now lost, as often happens with protruding parts of sculptures.

Capitals of other animals also survive, such as the elephant in Sankissa. The careful representation of animals is a testament to their esteem in Buddhist traditions. The desk top consists of the cardinal directions in marquetry. We have used teak, pine and mulberry wood to to achieve a contrasting tone and grain. Humans often subliminally chase the goal of being immortalised. We aim to achieve that through very personalised, custom-made pieces that are destined to become cherished heirlooms. What would you look like as a desk?